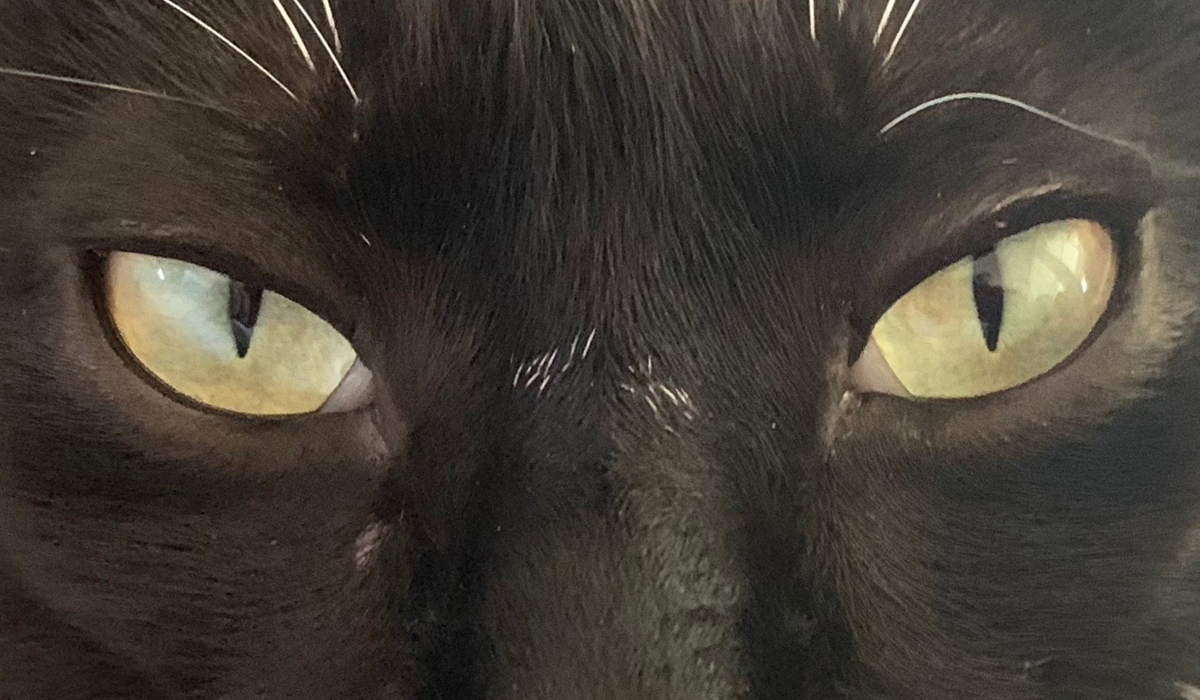 Will Feral is our feral. He has been with us since January 2018. We first noticed Will walking across our back patio every evening within five minutes of 6:00 PM, and he was always a few minutes behind a larger gray feral. I was traveling with my nursing assignments, so Bob was putting enough food out in the evening for both ferals. We had a bet going to see which of us could be sitting on the patio while one of the ferals ate, which was highly unlikely since both cats would dash away as soon as they heard the door open. And by dash away, I mean full sprint, never looking over their shoulder.

After about six weeks, the gray cat quit coming by, but you could set a watch by Will’s 6:00 appearances. He seemed especially fond of warm rotisserie chicken.

One evening while I was on the west coast, Bob slowly coaxed Will into the sunroom. Will was badly injured with many open and infected wounds, and his anxiety level was off the chart once he realized Bob wasn’t going to let him back outside.

We got him to the vet the next day. His tail had a badly infected open wound, and his rectum had been bitten through. He was oozing noxious body fluids and infection and smelled awful. Dr. Hill and her staff at Southern Paws Animal Hospital debrided and bandaged his tail and stapled the open wound in his rectum. Dr. Hill, however, wasn’t exactly sure what she had stapled and hoped Will would not remove the staples himself.

A cone was practically pointless because Will would simply snag it with a back foot and slip it over his head. He has such naturally silky and oily fur that, regardless of how tight the cone was secured, he removed it in seconds.

The wounds were pretty serious, and Dr. Hill made no promises regarding Will’s survival. And the honey bandages on his tail needed to be replaced every two to three days, which meant weeks of restraining a feral cat and removing and replacing bandages on a very painful wound.

As you can see from gallery photos, the vet techs thought it would be funny to put little shapes in his bandages, but it didn’t take Will long to destroy whatever we or they put on him.

During the first three weeks of captivity, Will tried to chew his way out of the house, especially at sunrise when he felt an overwhelming need to get back to his outside hiding place. We saw this behavior with all of the ferals. They have a pattern to their day, and obsessively stick to it. We tried to find a no-kill solution for Will, but he eventually bonded with my husband Bob (not a cat person), and it was Bob who made the decision that we should keep Will.

Will has been extremely cooperative with my fostering. All we really ask of him is to not hurt the kittens, whom he simply ignores. Once in a while, a kitten will cross a boundary with Will and get a good swat on the head. We have had three black or tuxie moms come through – Kiki, Chloe, and Stella – and many of the kittens have mistaken Will for a mom, but they only do it once.

Will still has many interesting feral behaviors. He doesn’t mind being wet, and on a hot day, will dig a hole in the flower bed to lay in the cool dirt or mud. He eats dead bugs and bird seed and strongly prefers that we watch him eat. In fact, he will come get us to sit next to him while he eats dry food.

It was fascinating watching him learn house sounds. We never realized how much the coffee pot and ice maker sound like growling. This was a good lesson for us. As soon as foster kittens are litter trained, we give them the run of the house to get used to normal house noises. Now, it’s not unusual to have a pile of sleeping kittens on the rug at the front door with people coming in and out, and the kittens never wake up.