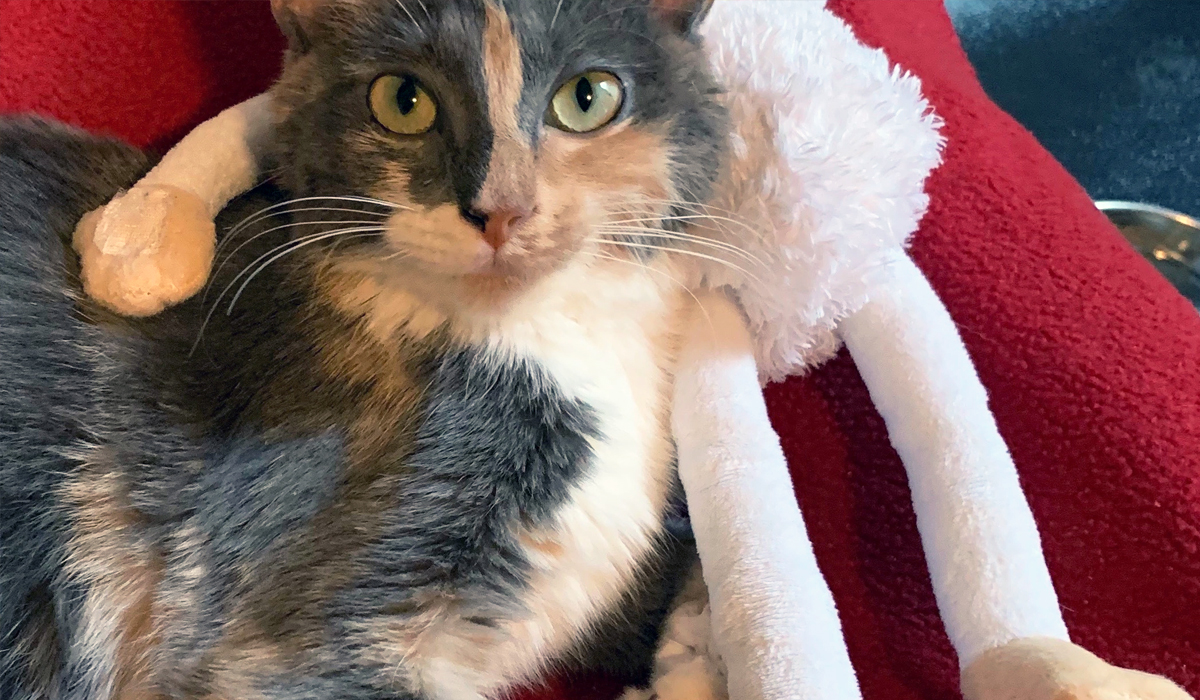 We got a call from a lady in our community that she had a feral cat inside her house. She asked if we would take a look at it. When we got there, we were shocked at how emaciated this calico female was, but also surprised by how friendly she seemed to be. The lady had fed her spaghetti noodles, which that cat ate!

Kind of the next thing we noticed was the cat never stopped chirping and meowing – hence, Gabby. Gabby took her intake bath as well as could be expected. Within the last few days we had captured Rocky II (a male feral) and had him in the foster room. Rocky II was still in the shutdown captured feral stage, but as soon as he laid eyes on Gabby, he came out of his crate to greet her. No aggression at all on his part, only what seemed like a combination of curiosity about her and concern for her. We cautiously let Gabby out of her caged enclosure, and she and Rocky II started hanging out together almost immediately.

Gabby weighed six pounds when she came to us, much less than half of the weight of our cats, Will Feral and Oshie. Nevertheless, from the moment she walked out of the foster room the next day, she commanded every room she walked into, and all of the boys seemed to understand that an alpha female had just joined the colony. Gabby was never aggressive, but she also never gave an inch. It was just assumed by her and the males that she was going to do what she wanted to do where she wanted to do it, and she was never challenged.

Gabby was adopted locally to be the companion of a special needs cat, Mr. Kitty. Sandy, the adopting mom, informed us that Mr. Kitty was nonplussed the first night Gabby was at their house when he walked over to sleep in his bed only to find Gabby there already, curled up sleeping. And so began Gabby’s happily ever after.